"A Little Gold, A Lot of Power" describes Banerjee's development of a circuit that can use solar or indoor lighting to power itself, freeing it from dependence on photovoltaic (solar) cells, batteries, or electric power supplies. Computers and other devices made with these circuits would have a clear casing that allows light in, which would be enough to power them. The article's title is drawn from the circuit's use of gold nanoparticles which, when combined with an organic molecule called porphyrin, generates an electrical current when excited by light.

Banerjee, who is advised by MSE professor and Maryland NanoCenter Director Gary Rubloff, created the optical circuits during an internship with Professor Dawn Bonnell's research group at the University of Pennsylvania's Nano/Bio Interface Center. The new technology was featured on a variety of popular science web sites after its publication in ACS Nano in Spring 2010.

For Additional Coverage of the Technology:

A Solar-Powered Circuit, But No Solar Cell Required 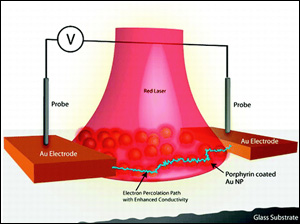 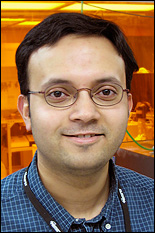