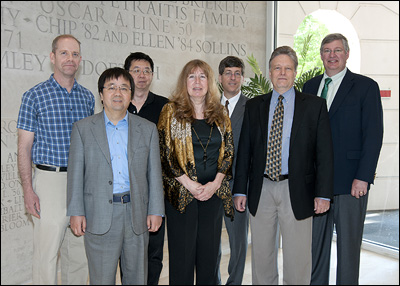 The Center for Research in Extreme Batteries (CREB), founded by members of the University of Maryland (UMD) and the U.S. Army Research Laboratory (ARL), hosted its first official meeting at UMD’s Riggs Alumni Center in May. The event drew experts from throughout the Mid-Atlantic who discussed their efforts to develop batteries for use in some of the most challenging environments in the world – and beyond.

Launched in late 2014, CREB grew out of a partnership between ARL senior chemist Kang Xu and UMD associate professor Chunsheng Wang (Department of Chemical and Biomolecular Engineering/University of Maryland Energy Research Center [UMERC]). After a series of successful projects and publications, the pair proposed a center to promote open access to facilities and collaborative research in advanced battery materials, technologies and characterization techniques. The National Institute of Standards and Technology (NIST) joined UMD and the ARL’s efforts to make CREB a reality.

CREB has already exceeded its founders’ expectations, says Professor Eric Wachsman (Department of Materials Science and Engineering), director of UMERC and a member of CREB’s steering committee. After the center’s announcement and launch, he says, “interest was overwhelming.” CREB was contacted by scientists throughout the Mid-Atlantic states, and from fields they had not originally expected. The enthusiasm helped the new center refine its goals.

“The battery community tends to be focused on making cheaper batteries for automotive applications,” says Wachsman, “and there’s a big need for that. But in developing these new batteries, we discover all kinds of chemistries that are really high performance, but not necessarily low cost. For a car, cost is the most important thing. But when it comes to the Department of Defense, NASA and biomedical applications, the primary factor is the battery’s performance. Can it take radiation in space? Can it survive extreme heat and cold? Can it take a bullet? Can it be implanted in a body? Those environments are extreme, and that’s why we developed this center for research in extreme performance, environments, and applications. That is an area that has been overlooked by the vast majority of battery centers.”

In addition to presenting research, attendees of CREB’s first official meeting discussed how to increase awareness of the center in industry, government and academic institutions; recruit new participants, define membership, and establish a framework for research funding and operational support.

“The meeting brought scientists and engineers from the University of Maryland, industry, the military, and national labs together to discuss how we can coordinate our efforts to solve critical problems in lithium-ion batteries,” says Wang, who is also a member of the center’s steering committee. “CREB has already accelerated my own group’s research through our collaborations with the ARL. I’m looking forward to new partnerships with agencies such as the Department of Defense and the National Institutes of Health, as well as industry.”