Researchers at the University of Maryland (UMD) and Huazhong University of Science and Technology, China have created the first transparent nanopaper that generates and stores its own power when pressed like a touchscreen. The device, called a transparent paper-based flexible generator (TPFG), could be used to create a variety of flexible and nearly invisible electronics such as antitheft and anti counterfeiting systems, interactive books, smart packaging, and touch-sensitive prosthetics. The research was recently published in ACS Nano and highlighted by Nanowerk and Chemical and Engineering News (C&EN).

TPFG was developed by the research groups of UMD assistant professor Liangbing Hu (Department of Materials Science and Engineering/University of Maryland Energy Research Center) and Jun Zhou, the assistant director of the Wuhan National Laboratory for Optoelectronics.

Like ordinary paper, nanopaper is made of wood pulp fibers, in this case broken down and reconstructed at the nanoscale to enhance its properties. This dramatically reduces the paper’s ability to scatter light, resulting in a material that is 90-95% transparent. The subsequent application of a thin coating of carbon nanotubes makes the paper strong and highly conductive. This makes it suitable for use in flexible electronics, organic solar cells, antennas and sensors. Unlike most plastics, nanopaper can be made from recycled and sustainable resources.

The TPFG is constructed with two sheets of nanopaper electrodes. One of the sheets is coated with a polyethylene film. The film is an “electret” material (electric + magnet) that converts mechanical energy to electrical energy. After applying a negative charge to the polyethalyne, the papers are joined with the polyethylene facing in, sandwiching it between the two sheets. A small air gap remains between them. In this state, the TPFG is in equilibrium, and there is no movement of electrons within it.

During testing, the TPFG retained its conductivity, maintained a consistent current over the course of 54,000 press/release cycles, and produced enough energy to power a small liquid crystal display.

Munday, Hu and Collaborators’ Research on Inside Cover of... 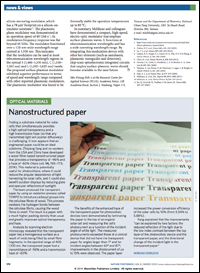 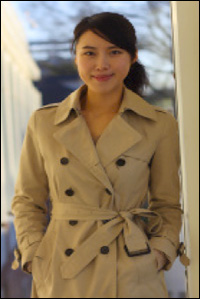 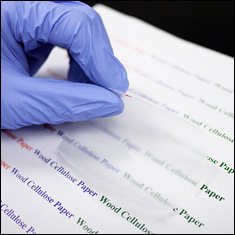 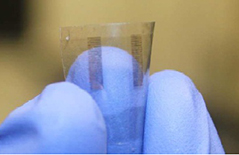 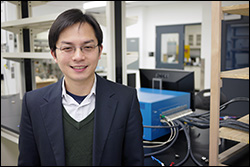 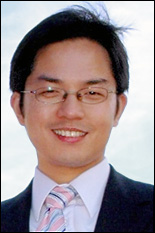 Emily Hitz Named by Nature as One of Five Early Career...